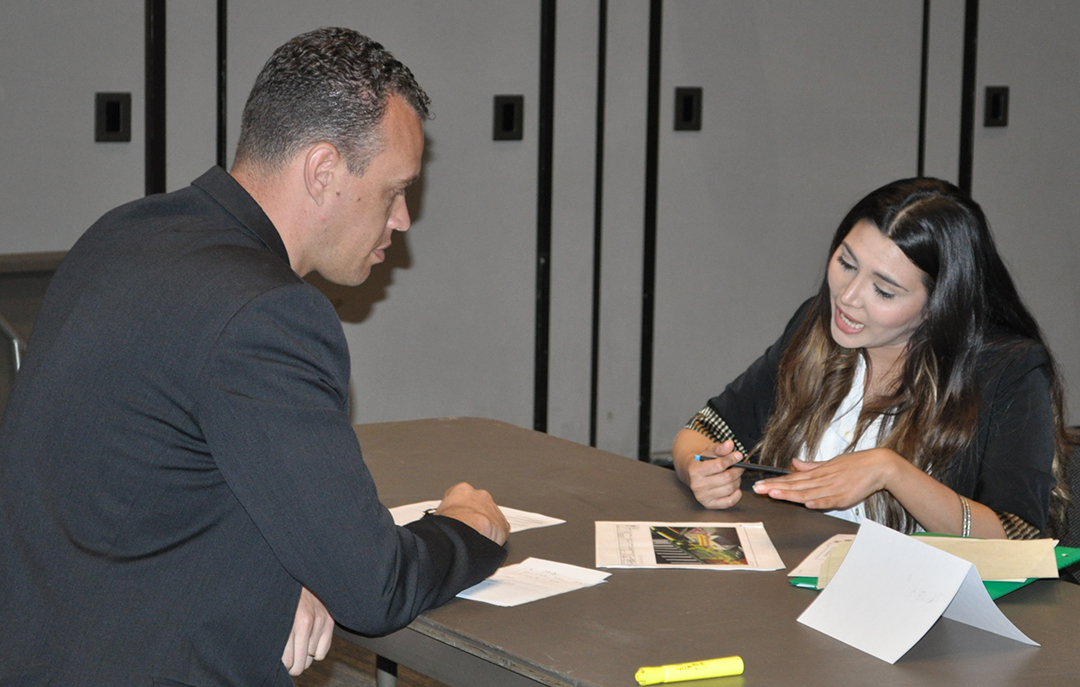 Countless online articles can tell you how to create the best impression during a job interview. But as with engineering itself, there’s no substitute for trying out those theories in the real world.

On Friday, the CSULB College of Engineering Office of Professional Development & Internships hosted its annual mock interviews, giving 530 students the opportunity to practice their interview skills with representatives from 48 employers. END_OF_DOCUMENT_TOKEN_TO_BE_REPLACED

Clark said the micro-kitchens serve a purpose in addition to keeping employees in snacks, refreshments, and meals. “They foster communication with other people. You might go to pick up a water and overhear someone trying to solve a technical problem and end up in a conversation,” he said. END_OF_DOCUMENT_TOKEN_TO_BE_REPLACED 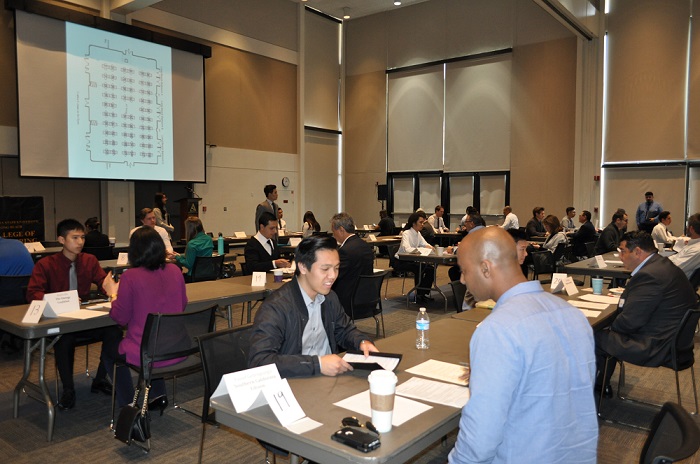 “I think it’s important to help the students get comfortable with interviewing,” said Eric Thibodeau, a workflow business manager with Xerox. “After all, it’s something nobody likes to do.” END_OF_DOCUMENT_TOKEN_TO_BE_REPLACED

If you’d like to know more about research and development, Behr Paint has openings for three summer interns.

The 70-year-old company, headquartered in Santa Ana, started off selling stain and varnish and branched into paint when it became a supplier to Home Depot. Behr was one of the first companies to introduce computer matching and combined paint and primer. END_OF_DOCUMENT_TOKEN_TO_BE_REPLACED

Is the Happiest Place on Earth a good place to complete your construction management internship? According to project managers from Walt Disney Co.’s Facility Asset Management division, interns have extensive opportunities to learn, take initiative, and hold responsibility.

A half-dozen project managers from the division were at CSULB Thursday as part of the College of Engineering’s Professional Development workshop series. Students were also given an opportunity to submit their resumes for paid summer internships. END_OF_DOCUMENT_TOKEN_TO_BE_REPLACED

Landing an internship is competitive. And to drive that point home, Chuck Landon, Shur-Lok Director of Human Resources, on Wednesday had students play a game of  “Family Feud.” Dividing contestants into the Electrical Engineering Family and the Mechanical Engineering Family, Landon asked teams to guess the top ways to botch their internships.

Students’ guesses included “not being enough of a team player,” but according to Landon, the biggest way to jeopardize your internship is by not managing your time wisely. “Poor time management skills is a great way to screw things up,” he said. “Coming in late, leaving early, taking long breaks, and not finishing projects on time.” END_OF_DOCUMENT_TOKEN_TO_BE_REPLACED

Xerox Vice President of Alliance and Partnership Management Arnold Hackett used to stay at his desk and work instead of having lunch with team members. He thought he was showing colleagues that he was making a contribution. But instead, co-workers thought Hackett just didn’t like them.

Going out to lunch with co-workers is just one of the ways you can build your network in a professional environment. Hackett, a 2001 CSULB MS graduate in computer science, visited the College of Engineering on Tuesday as the first speaker in the Department of Professional Development & Internships’ fall 2016 series. END_OF_DOCUMENT_TOKEN_TO_BE_REPLACED

It’s always interesting when an engineering company visits campus to share their story with students—even more so when that company is hiring. Executives from Ledcor Construction were at CSULB this week to announce summer internship openings that could possibly lead to future full-time work.

“This is one of those opportunities where if you snooze, you lose,” said Emmitt Clark, Director of Professional Development and Internships for the College of Engineering, who arranged the visit. END_OF_DOCUMENT_TOKEN_TO_BE_REPLACED

After three decades in the workforce, Hal Snyder, a member of the Dean’s Advisory Council, has learned a fair amount about attributes of good leaders. Snyder, Vice President of Human Resources for Diversity and Inclusion at Southern California Gas Co., was at CSULB Tuesday to speak to engineering students about how to become future leaders.

The most important leadership attributes, he said, join together to spell WIRED. “This is truly what we look for,” he said of the five attributes. “These five are golden.”

END_OF_DOCUMENT_TOKEN_TO_BE_REPLACED

Bryan Kwon, a 2004 CSULB computer science graduate, was back on campus this week to share his experience in the job world with College of Engineering students. Kwan, now senior director of customer engagement at Santa Monica-based Akana, told attendees at the Professional Development Workshop that it’s important that your first job after college matches your interests.

When he graduated, Kwon went to work in information technology, but after three years became bored with backing up tape drives and taking care of routine technical issues. “I was really bored,” he said. “I really wanted a challenge.” END_OF_DOCUMENT_TOKEN_TO_BE_REPLACED