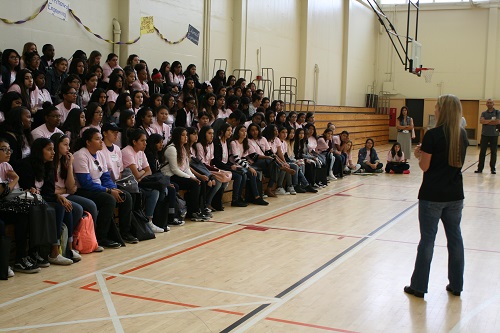 About 150 girls from local middle and high schools participated in the event, which was sponsored by the CSULB chapter of the Society for Women Engineers and co-sponsored by the American Society of Mechanical Engineers, Associated Students Inc., the COE Engineering Student Success Center, and Southern California Edison.

Women Engineers @ the Beach exposes middle- and high school students to engineering through workshops and letting them hear from professional engineers. During Friday’s event, the girls were able to make a battery from a lemon, try out computer programming, see how robotics works, use a microcontroller to power an LED light, and identify bad product design.

Mandy joined Virgin Galactic in 2015 to support business development on the LauncherOne program for both government and commercial customers. She also is the Mission Manager for various commercial customers and for the NASA Venture Class Launch Service mission. In this role, she is responsible for the definition of mission requirements and the integration of their spacecraft to LauncherOne to enable successful launches to low-earth orbit.

Vaughn earned her BS in Mechanical Engineering and MS in Aeronautics and Astronautics from the Massachusetts Institute of Technology through the ROTC program. She joined the Air Force as a developmental engineer and program manager, working in the ICBM system program office at Hill AFB in Utah then in the Space Superiority Systems Directorate at Los Angeles AFB in California. At Los Angeles AFB, she was ground segment lead and then chief engineer on the Space-Based Space Surveillance program, which launched in 2010 and is still on-orbit collecting data today.

Later, she was with General Dynamics Mission Systems and Kinsey Technical Services in the Space and Intelligence Systems Division, where she was responsible for the space protection and next-generation GPS space-based receiver research and development portfolios.

Vaughn’s hobbies are hiking, boating and aviation. She has been flying since age 11, and became a licensed private pilot at age 18. Vaughn has accumulated more than 700 skydives and climbed Kilimanjaro in Tanzania and Aconcagua in Argentina. She joined Virgin Galactic in 2015.

Vaughn encouraged the girls to take the most difficult classes they can and don’t shy away from challenges. “You don’t know if you can do it until you try. And it doesn’t matter where you go, it’s what you do,” she said.