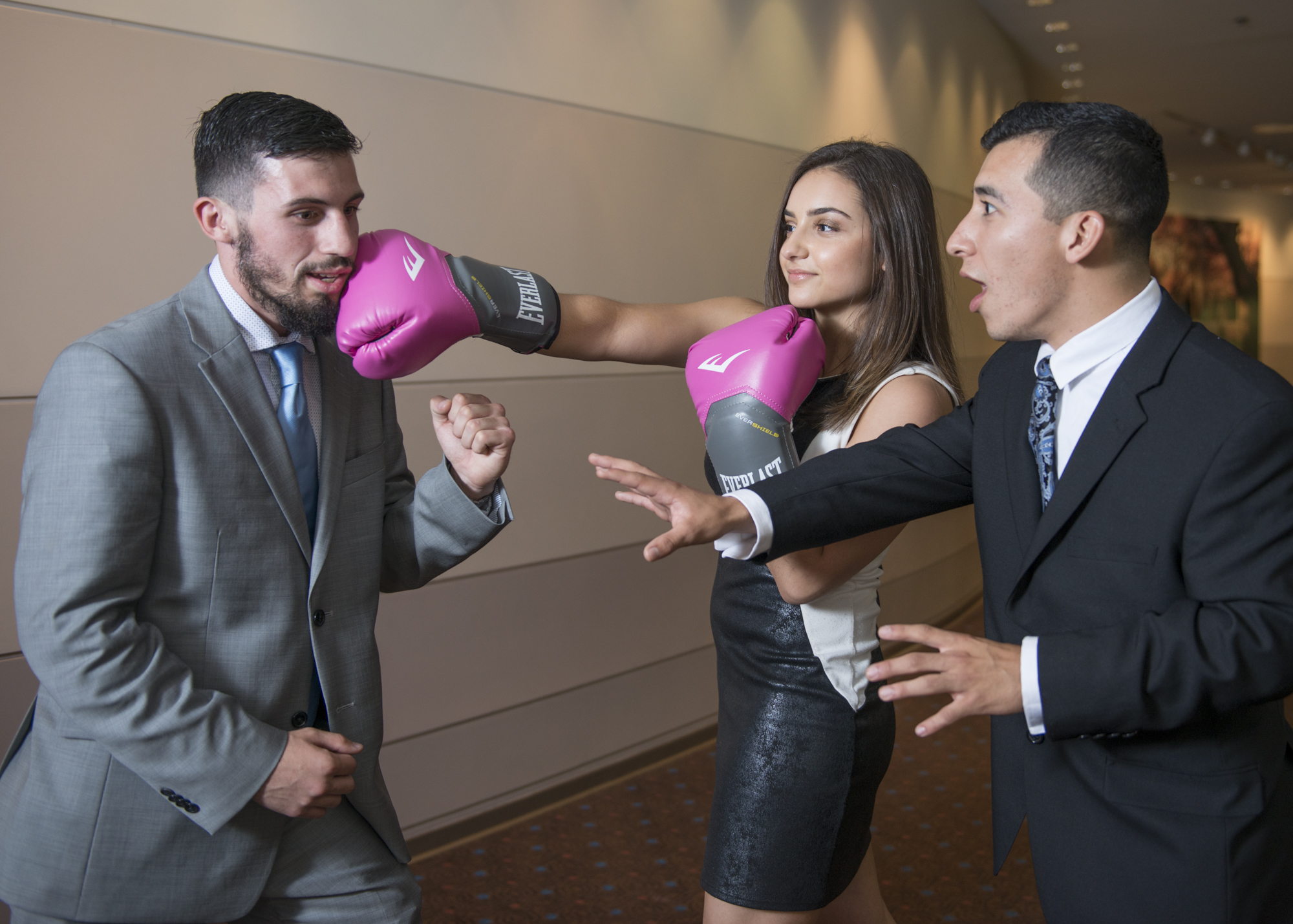 The CSULB Innovation Challenge’s top team for 2016 took repeated punches and jabs from senior citizens to test out its winning business idea, while the runner-up watched hours upon hours of video games.

The Boxing Movement team, made up of business majors Anthony Gonzalez, Eric Lara and Gina Gionta, won the top prize of $10,000 in seed funding and $40,000 in services for a mobile boxing ring that could be trucked to recreation centers and other facilities to help seniors have fun and maintain strength.

The Boxing Movement team was made up of (l-r) Anthony Gonzalez, Gina Gionta and Eric Lara.

“It’s something that can benefit the entire senior population,” said Gonzalez, a personal trainer at CSULB’s Student Recreation and Wellness Center. He added that spending on wellness-based services is expected to increase from its current level of $200 million to $1 trillion by 2025.

Team members got the idea after seeing elderly relatives break bones in falls and face a difficult recovery. To test it out, they boxed with seniors at CSULB’s LifeFit Center. The Boxing Movement already has several interested customers. The winnings, said Gonzalez, will go toward buying a truck and building the trailer.

“The bloggers are calling 2016 the year of virtual reality,” he said, noting that the industry is forecast to be generating $30 billion annually by 2020.

What sets The Yoke aside from its competitors is that it’s fully immersive instead of 2D. “When you hang onto a rock wall, you can feel the rock wall,” Scholten said.

This was the first year the Innovation Challenge has awarded prize money to its runner-up—$5,000. The contest is supported by sponsors and volunteers, as well as the colleges of the arts, business administration and engineering.

President Jane Close Conoley said that entrepreneurship will help create the jobs of the future. “This is my second Innovation Challenge. I’m increasingly excited about this program,” she said.

The Innovation Challenge was created six years ago as a way to support innovation and entrepreneurship at CSULB. Its goal is to help commercialize at least one new business annually.

Mike Baghramian, a member of the contest’s advisory committee, said 18 of this year’s 28 participating teams submitted business plans. “Innovation and creativity on the student teams continues and is stronger than ever,” he said.

The two other finalists were 1010 Innovation Labs, which developed a solar-powered phone charger that users could take hiking, running or to music festivals; and Earth + Modern, a sustainable retailer.

“Mobile phones are supposed to provide freedom, but when your phone is down to 20-30 percent, how free are you feeling?” team leader Calvin Leung asked the audience in demonstrating the charger prototype. Besides Leung, the team included Rudy Delgado, Oscar Dossland, Alec Selfridge and Dylan Smith.

Jayme Fletcher, leader of the Earth + Modern team, said there’s a strong market for sustainable products among Millennials. She and her teammate Jake Crawley said a circular supply chain is necessary in light of the fact that at current consumption levels, “we’ll need three-to-five planets to sustain us.”

Teams are assigned mentors to help them. More than two dozen mentors from a variety of professional disciplines volunteer to provide advice to the student teams.