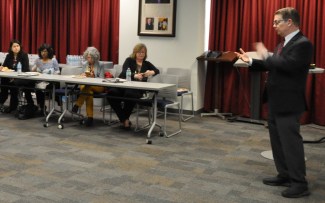 Inventors previously secured patents by documenting that they were the first to conceive of the invention. Now, however, patents are issued to those who file first with the U.S. Patent & Trademark Office.

“An inventor has to file the patent as quickly as possible. It’s who gets to the patent office first,” said Boeing Technical Fellow Wayne Howe, speaking at the second meeting of the CSULB chapter of the National Academy of Inventors.

College of Engineering Dean Forouzan Golshani, the chapter president, said generating and protecting intellectual property is an important aspect of academic life. The meeting was attended by faculty from throughout the university.

Howe, who holds a law degree and intellectual property certificate, as well as a master’s degree in computer science, agreed. “You can have all these inventions and if you don’t view them as property, it doesn’t deliver any value in return,” he said.

Patents can be obtained on a variety of assets, including videos, images and graphics, business processes, source code, named and logos, even flowcharts. “All of this is IP. They all have their own unique way of being protected,” said Howe.

The Boeing Technical Fellow shared a story about his grandfather, an engineer who invented the automatic pinspotters that are still used to reset pins at bowling alleys.

To file for a patent, an inventor needs a thorough description. “You want to throw everything in except the kitchen sink,” Howe said, adding that you can amend the filing as the invention evolves.