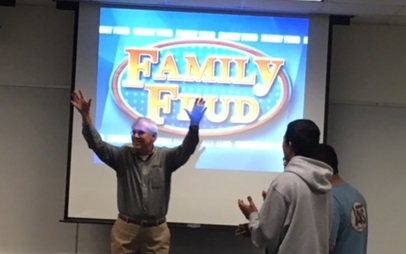 Landing an internship is competitive. And to drive that point home, Chuck Landon, Shur-Lok Director of Human Resources, on Wednesday had students play a game of  “Family Feud.” Dividing contestants into the Electrical Engineering Family and the Mechanical Engineering Family, Landon asked teams to guess the top ways to botch their internships.

Students’ guesses included “not being enough of a team player,” but according to Landon, the biggest way to jeopardize your internship is by not managing your time wisely. “Poor time management skills is a great way to screw things up,” he said. “Coming in late, leaving early, taking long breaks, and not finishing projects on time.”

The second biggest way to blow it is by not taking time to understand the company culture. Knowing the culture is key to being able to network effectively and also understand what is and isn’t appropriate.

“The people you’re working with at your company are future references—they’re your mentors,” said Landon, who was a speaker in the CSULB College of Engineering Professional Development workshop series.

Follow the dress code and don’t be reluctant to take on menial tasks. “Menial tasks are a part of every job. Don’t get down in the mouth about it,” he said.

Landon urged students to do their best to secure an internship, co-op, or part-time position—since it’s important to have some experience. “I’d much rather hire a 3.0 student with numerous internships and co-ops than a 4.0 student with no experience,” he said. “From a hiring manager’s perspective, it is critical. I don’t care if you bussed tables or worked at the Nugget—do something.”

Getting your first internship or co-op position can be the hardest part. Landon said he and his team gathered 200 resumes at the recent CSULB STEM Job Fair alone. Large companies like Boeing, he said, acquire resumes by the thousands.

Shur-Loc is part of Precision Castparts Corp., a Berkshire Hathaway Company, and manufactures metal components for the aerospace, power, and general industrial markets. The company offers both co-ops and internships and is looking for mechanical engineering or industrial systems students.