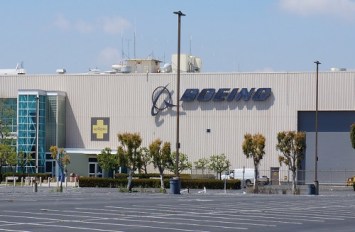 Students often attend lectures or solve problems for extra credit, but Dr. Juan Cepeda-Rizo’s MAE 330 Thermodynamics class had an opportunity to do something with more impact—create a proposal for reuse of the shuttered Boeing C-17 production facility.

Cepeda-Rizo, who lives near the former aircraft plant, offered the opportunity at the beginning of the semester at the suggestion of neighbor Patricia Chen. With an interest in sustainable energy, students Mohamad Alkam, Hope Daley, Elyssa Lawrence, and Eric Velazquez immediately stepped forward. Facing a tight deadline of Sept. 12, the students came up with an idea for a solar park for the 160-acre site on Cherry Avenue near the Long Beach Airport.

“The goal was to explore placing a solar park on the property that would convert solar energy into usable power that could be patched into the grid for use by the local residents,” said Cepeda-Rizo, who supervised the students and assigned them focus areas based on their interests: solar panels, solar concentrators, cost/economic impact, and jobs expected to be generated.

The Pacific Gateway Workforce Development Board, which is managing a $3.9 million U.S. Department of Development grant to transition the site and its displaced workforce, sent the students requirements and project limitations.

The students offered three energy-generating scenarios. A fixed-tilt photovoltaic system would generate 30 megawatts of energy, enough to power nearly 5,000 homes for one year. That compared with the 43 megawatts that 13,360 that Thermal CSP power dishes would generate on the site and 250 megawatts produced by 3,704 Advanced Full-Spectrum CSP dishes.

Building a solar park would help make Long Beach less energy dependent. The students estimated that 3,000 jobs would be created for every 100 systems installed. The park would result in utility revenue for the city, as well as property and income tax revenue. Apprenticeship programs could be offered during construction to add a job-training element.

At the end, the students presented the proposal at a Sept. 12 community meeting the city organized at Long Beach City College. Cepeda-Rizo, who works as a Lead Thermal Systems Engineer at the Jet Propulsion Laboratory, said the proposal was well-received, and hopefully will lead to students contributing more research to community organizations.

“I was impressed with the level of technical detail that the students presented as junior level engineering students,” he said. “More importantly, they were motivated by the nature of the project that that it would be presented to the city of Long Beach.  Also impressive was demonstrating that the 3,000 to 5,000 jobs lost during the C-17 plant closure could be replaced with high salaried, technical jobs by putting in a solar park on the C-17 property.”

During its peak, the C-17 facility employed up to 5,000 people. Production of the large military transport planes began slowing in 2010, with the final C-17 produced in 2015. Boeing halted further production of the C-17 due to what it said was insufficient global demand. The company previously built the 717 in Long Beach.