“This is a time of celebration,” said Chemical Engineering Chair Roger Lo. “Let us know how you’re doing and stay in touch.” END_OF_DOCUMENT_TOKEN_TO_BE_REPLACED

The College of Engineering this Saturday will be holding its 2nd annual Engineering Night at the Pyramid. Students, faculty, alumni, staff, and guests are invited to come cheer on the CSULB Men’s Basketball team as they take on University of California Irvine.

The game begins at 8 p.m. and will be televised on ESPN. A pre-game reception for alumni will be held at 6:30 p.m. in the Pyramid dance studio. For game tickets, visit www.longbeachstate.com/coe17. Alumni and faculty can RSVP to the game and reception at coe-dev@csulb.edu.

The College will also be marking its 60th anniversary with interactive displays. The anniversary will be celebrated throughout the year with historic photos posted on the College’s Facebook page

Dating back to the Middle Ages, catapults were used to storm castle walls—and hurl rocks, fireballs, and hot tar. This wooden catapult uses bunjee cords for tension. It will be throwing a basketball and taking on a former 49ers shooter in testing its hoop skills.

Dunham said when Dr. Yu suggested the project, “it sounded like fun.” However, as in the case of most engineering projects, turning the idea into reality was much more difficult.

The trio admit that being ChemE students put them at a disadvantage. “Building it was the tricky part because we don’t focus on physics in our major,” said Alonso, adding that they found plans for building a catapult on the Internet.

They worked on the catapult mostly over winter break, testing it in Dunham’s backyard. Another challenge was that none of the students had previously measured or cut wood. “It sounded easy but ended up being hard,” said Dunham.

Last summer, while working as an OSRP Research Assistant, chemical engineering undergraduate Quang Ly faced a problem so challenging he almost gave up. But because the problem was so compelling—with potential major applications for fuel-cell batteries—he persevered.

“It was very frustrating. Sometimes I wanted to give up, but then I would take a rest and get back to it the next day,” he said.

After two months of effort, he made a breakthrough—attaching an -OO group, the first step in attaching OO to the graphene. Frequent conversations with his advisor Ted Yu were a big help in understanding the problem. Ly entered his paper, “Quantum Mechanics Simulation of Fe–N–C,” in the CSULB Student Research Competition, placing second. Then, unexpectedly, he became one of 10 CSULB undergraduate and graduate students selected to compete on the systemwide level April 29-30.  END_OF_DOCUMENT_TOKEN_TO_BE_REPLACED 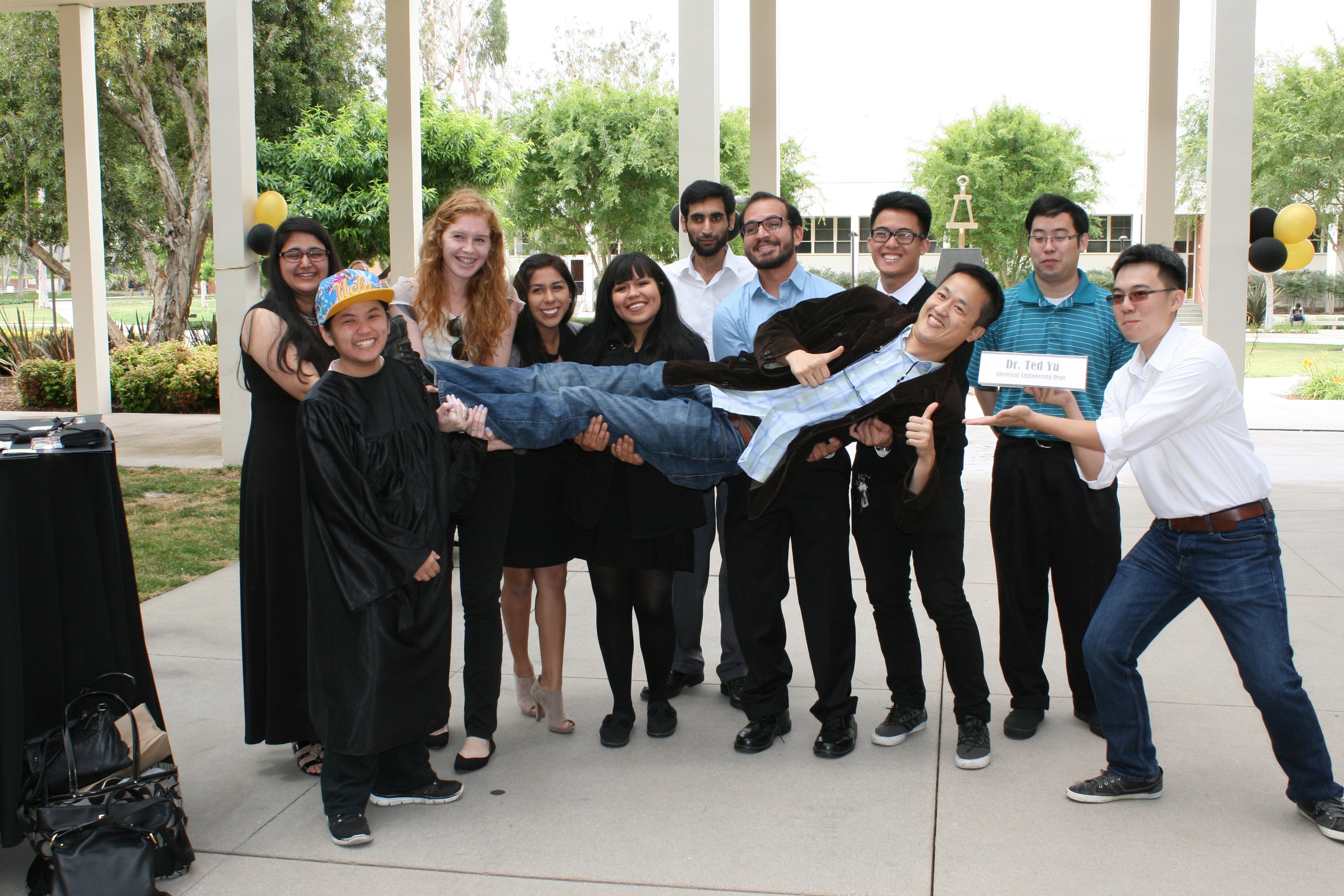 Chemical engineering may be the smallest department in the CSULB College of Engineering, but that wasn’t apparent by the turnout for Monday’s Department Graduation in ECS-105.

Chair Larry Jang compared graduates’ education to a chemical process involving reactors, catalysts, and purification. “Before, you were students. Now you’re an engineer. You’ve become a high-value product,” he said.