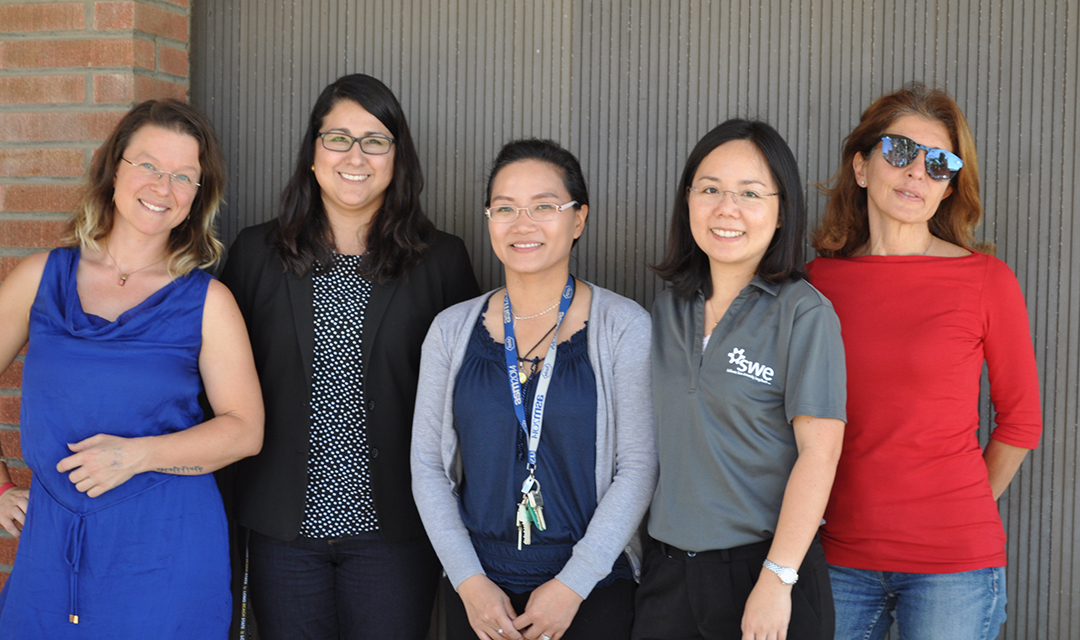 Eventually, her desire to return to engineering led her to earn a master’s degree and doctorate from University of California Irvine. At CSULB since 2012, Asvapathanagul is an expert in biological water reclamation.

Antonella Sciortino, a civil engineering professor and the College of Engineering’s coordinator of graduate programs, had engineering in her blood. “I’d always liked going beyond what was presented in school,” said Sciortino, whose father was a structural engineer. “Engineering came naturally.”

“That’s where I fell in love with two things—my husband and research,” she said.

Computer science Assistant Professor Birgit Penzenstadler fell into her field by accident. Initially drawn to communication design, she was at a loss when she couldn’t get into that program. Web design caught her eye and only at the last minute did she see in the fine print that it was a computer science program.

Penzenstadler said her insecurity about computer science led her to study hard. Her father was pleased she was pursuing engineering instead of art, but some boyfriends asked, “Are you sure computer science is the right choice?”

As it turned out, for Penzenstadler, the answer was yes. She earned her diploma in Informatics from University of Passau in her native Germany, then her doctorate from Technical University of Munich. With an interest in sustainable software development, she joined CSULB in 2015 after working as a postdoctoral researcher at University of California Irvine.

Dr. Panadda Marayong, an associate professor in mechanical engineering, was on a science track in high school when an advisor encouraged her to study mechanical engineering. She earned her BS from Florida Institute of Technology and master’s and doctorate from John Hopkins University. With an interest in robotics, at CSULB she is director of the Robotics and Interactive Systems Engineering Lab.

Reflecting on her path, Marayong said: “Part of it is the opportunity given to me, but you have to reach out for it too.”

Perla Ayala’s story began in Mexico, where she read her family’s one small encyclopedia cover to cover. Attending high school in the United States, her interest in the brain led her to take as many classes as she could.

Realizing she was less interested in chemical compounds than in applying the knowledge, she opted to study chemical engineering at UC Riverside, near her family. Ayala ventured north to earn a doctorate in biomedical engineering from UC Berkeley and UC San Francisco, then east to work as a postdoctoral researcher at Beth Israel Deaconess Medical Center, Harvard Medical School, and the Wyss Institute for Biologically Inspired Engineering.

Wanting to return to California, Ayala was hired as the CSULB Biomedical Engineering Department’s first full-time faculty member. “As long as you’re working hard, you’ll find doors to knock on,” she said.