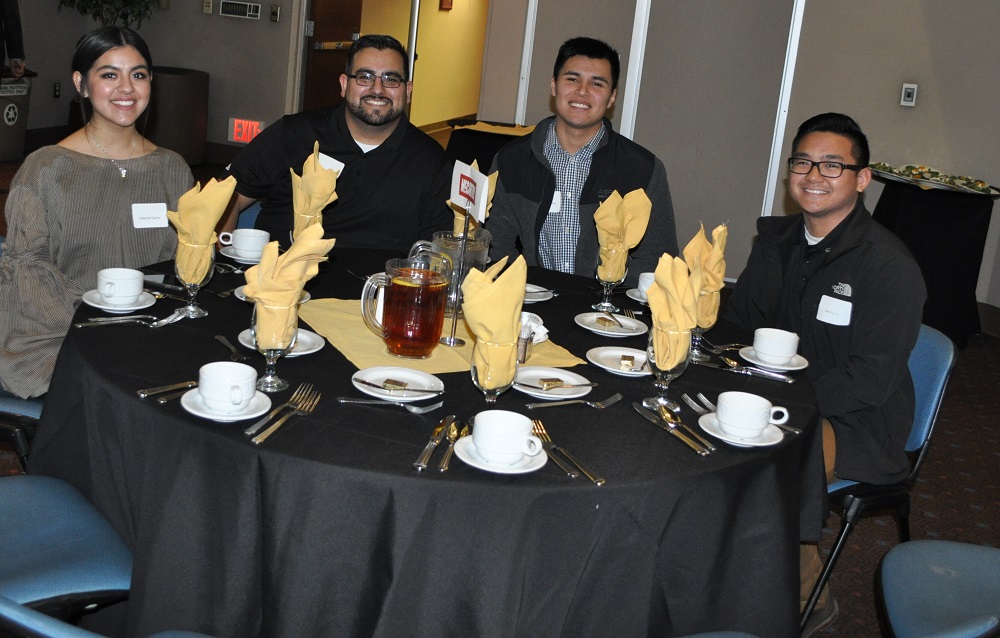 The CSULB Construction Engineering Management program’s inaugural Speed Networking event brought together 63 students and seven construction companies Wednesday evening. Students had the chance to eat salad with one company, dinner with another, and dessert with a third—with even more networking time after dinner.

“Hopefully there will be matches made for careers here tonight,” Golshani said, offering special appreciation to Dave Callis, senior vice president of Swinerton, who came up with the idea for the networking dinner.

Swinerton also supports CSULB teams competing in the annual Associated Students of Construction (ACS) Reno Competition. “It’s events like this that are going to make the department and the school top-notch,” said Callis, a 1988 CSULB graduate.

The dinner drew both new and longtime CEM program supporters. Representatives from CASCO Contractors, a woman-run company led by CSULB alumni Cheryl Osborn, heard about the networking dinner while participating in a recent CSULB job fair.

Meanwhile, Turelk, a Southern California tenant improvement contractor, has been working with the CEM department for decades. “We’ve been supporting this program for 22 years and we’re proud to be here,” said President Mike Turi.

Students appreciated the opportunity to get to know more about the companies. CEM students Chantal Triay and Brian Cook are both looking for internships at companies that offer hands-on experience. When second-year CEM student Eric Castaneda was asked which companies he’s interested in, he said: “All of them.”

Not so long ago, CSULB CEM graduate Siraj Aboulhosn was looking for an internship too. As a project engineer for Clark, he’s now on the other side of the table. He first connected with Clark at a CSULB job fair. “I love it,” he said of his full-time job. “I received detailed training—they even flew me to Washington, D.C. for two weeks—and everybody has been very helpful.”

Although the dinner provided networking opportunities, another way for CEM students to show their mettle is by competing in the Reno Competition, which draws more than 1,000 students from 40 schools.

Sponsor companies bring challenging real-life problems for students to solve. Teams spend up to 24 hours devising solutions. And as in real life, the bid packages aren’t accepted if they’re not turned in on time.

The CSULB CEM program is sending eight teams with a total of 62 students to the Reno Competition. The teams are divided into construction specialties such as concrete, heavy civil, and design and build. Some proceeds from the Speed Networking dinner will help pay for student travel costs.