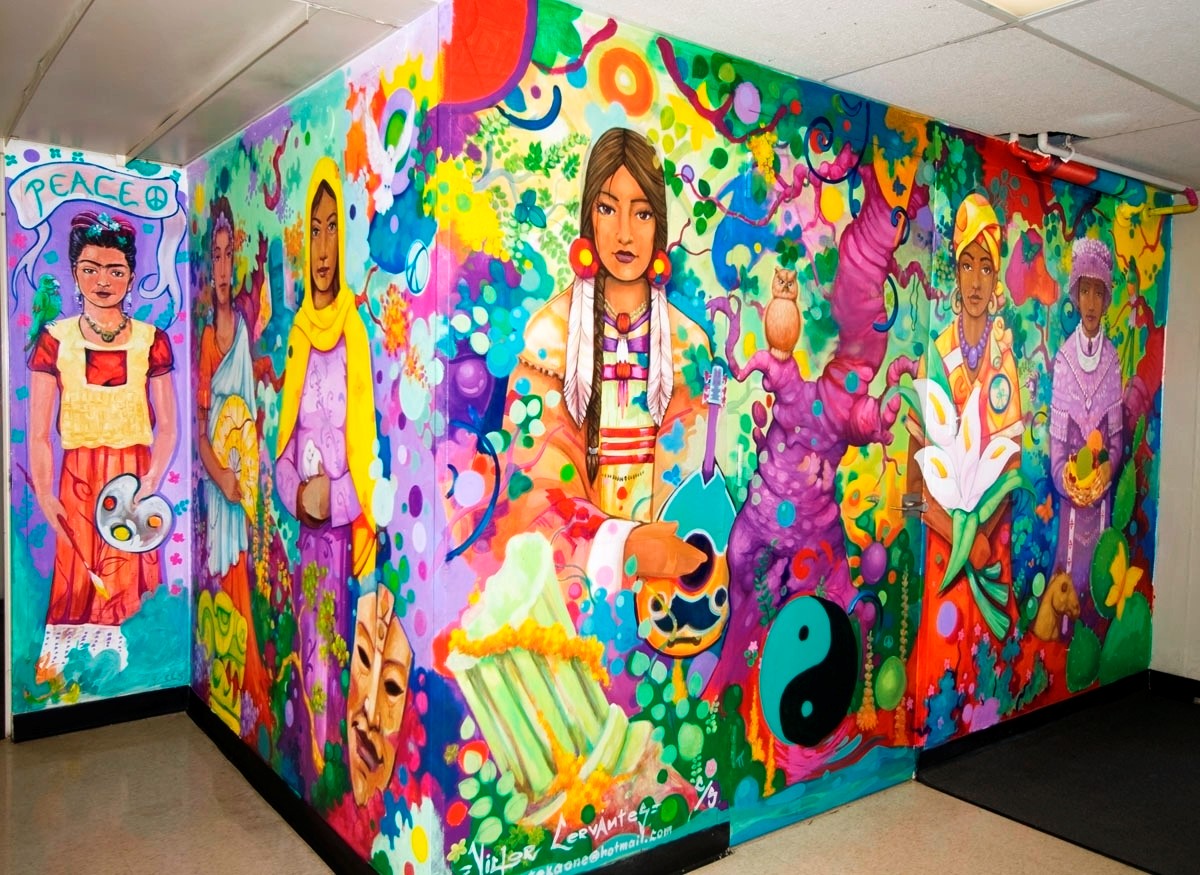 Victor Cervantes majored in Art Education and graduated from CSULB. He went on to work for the Lynwood Unified School District, where he taught art to students. He subsequently opened his own Art Collective in Los Angeles.

The mural is located in the main hallway of the FO3 building, which leads to the Multicultural Center.

The Walter Pyramid is a nationally recognized symbol of the CSULB community. Named after the Walter family, the pyramid is 18 stories high, has multi-purpose capacities and is located on the north side of campus.

The Ancient Pyramids of Giza were constructed over 4,500 years ago. Located in northern Egypt, the pyramids are considered to be one of the Seven Wonders of the World. Originally designed by kings of Egyptian civilization, the Pyramids include temples, causeways and burial chambers.

Chichen Itza is located on the Yucatan Peninsula by the Mayan civilization. It is a UNESCO World Heritage site and a testament to pre-Columbian civilization. The stone structures are said to have been sacred sites to the Mayan peoples, where ceremonies to the gods took place.

The Luxor Pyramid in Las Vegas is a hotel and casino. It was opened in 1993 and is the fifth largest hotel in the United States. Named after the city of Luxor in Egypt, the Luxor is over 100,000 square-feet and has 2,526 rooms, 29 retail stores, a wedding chapel, a Spa, four swimming pools, a whirlpool, and a convention space.

This mural celebrates architecture over time, gauging the process of human accomplishments across civilizations and time periods.

Cynthia Lujan graduated from the CSULB Fine Art and Drawing Program and currently works for the Arts Council of Long Beach as a Special Projects Assistant. James Morales is also a CSULB alumnus and is currently waiting to hear from Disney studios in Illustration and Animation.

The mural is located in the FO3 building, down the hallway of the Multicultural Center and on the left in the landing leading to the second floor. 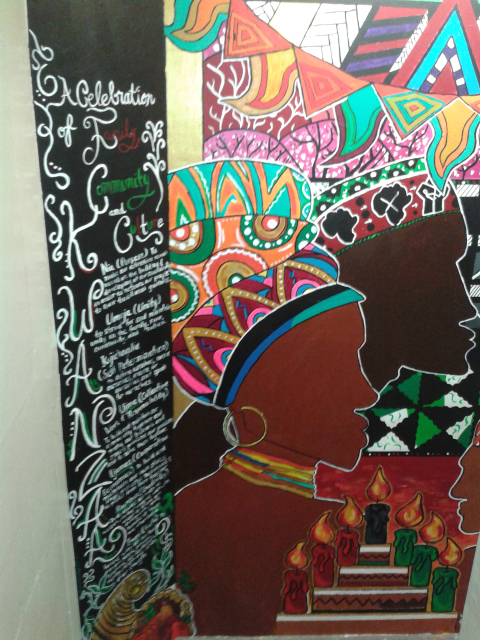 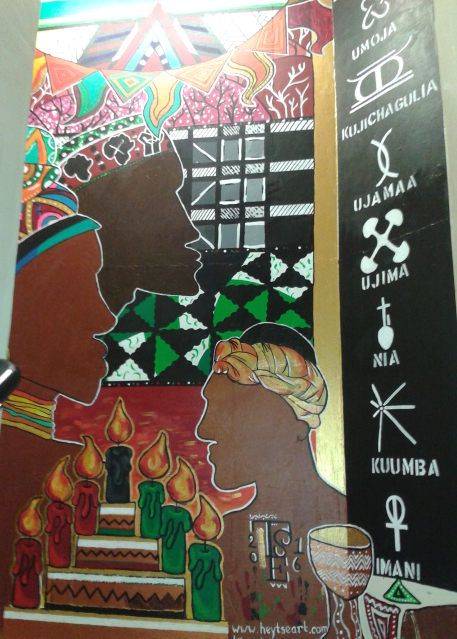 Kwanzaa is an African-American Holiday founded by CSULB's very own Professor Malauna Karenga. Kwanzaa is a holiday celebrated from December 26th to January 1st, first established in 1966. Kwanzaa comes from the Swahili language and means "first fruits." It is a celebration of African and African-American culture, community and family. The colors of Kwanzaa are black, which stands for the African Diaspora community, red which stands for their struggles, and green, which stands for hope for the future and the land of Africa. The mural depicts the important symbols of Kwanzaa on the right-hand side and includes a brief description of the celebration on the left-hand side.

Professor Malauna Karenga is a Professor and Chair of the Africana Studies Department at CSULB. He earned his B.A. from UCLA. He has two PhDs, one in Political Science from United in 1976, and one in Social Ethics in 1994. He was an active student and scholar in various black movements in the 1960s and 1970s and continues to be an active scholar, activist and intellectual within the black community.

Tijera "Tse" Easley is a CSULB student and self-taught artist. She was commissioned to create the mural in January of 2016. She has been an artist all her life and has worked on art pieces in and around the Los Angeles area.

The mural is located on the second floor stairway of the FO3 building.