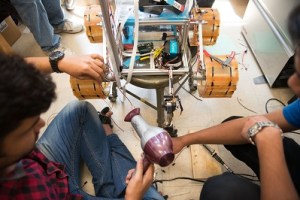 A multidisciplinary team from CSULB’s College of Engineering will be back competing in RASC-AL Robo Ops again this year. The CSULB team was among eight finalists selected to design and build a rover and travel to NASA Johnson Space Center in Houston to test its performance on Mars-like terrain.

Sponsored by NASA and managed by the National Institute of Aerospace (NIA), RASC-AL—short for Revolutionary Aerospace Systems Concepts-Academic Linkage—challenges multidisciplinary graduate and undergraduate teams to design and build a planetary rover and demonstrate its ability to perform tasks in the Rock Yard, an environment that simulates the rough terrain of the moon and Mars. END_OF_DOCUMENT_TOKEN_TO_BE_REPLACED