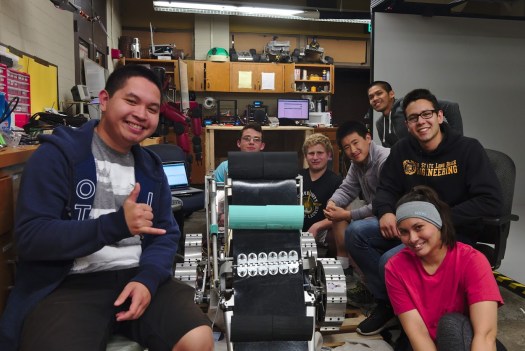 Student teams entering a NASA competition to build a mining robot can expect technical challenges. But in addition to engineering glitches, last year’s CSULB Lunabotics team had to contend with a government shutdown, sudden venue change, and last-minute scramble for funding.

Dehwei Hsu, the mechanical engineering senior who led last year’s FortyMiners team, said the robot’s design and development was already behind schedule when the government shutdown forced NASA to cancel the scheduled competition at the Kennedy Space Center in Florida. Teams still submitted reports and a slide presentation, but instead of the onsite competition in Florida, University of Alabama hosted a Robotic Mining Challenge at its Tuscaloosa campus.

“Instead of Florida, it was Alabama,” said Hsu, who was previously the rover lead for Long Beach Rocketry. “The only problem was we were funded for Florida, but not for Alabama.”

Alabama is among 11 non-LGBTQ-friendly states where California funds can’t be used for travel. In light of that, the FortyMiners scaled back their contingent to four people. In addition to raising money for the team’s travel, they had to secure $1,200 to ship the robot there and back. 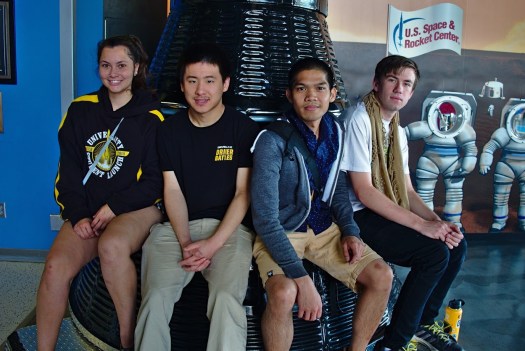 The FortyMiners came in 26th out of 46 schools in the virtual competition. Of the 27 schools competing onsite, only nine robots ran, and three autonomously.

This year, the team has a new name (the Space Sharks), a new design, and 20 new members, drawn from computer science and aerospace, electrical, and mechanical engineering. They are assigned to subteams for drivetrain, excavation, and electronics.

Providing students practical experience in the engineering lifecycle, from concept development to system closeout, Lunabotics supports NASA’s Artemis program, which aims for a 2024 moon landing and sustainable exploration by 2028 as part of the Moon to Mars mission.

On the lunar surface, NASA plans to demonstrate technologies, expand commercial opportunities for deeper space exploration, and test methods to obtain water from ice and other natural resources. The water discovered at the lunar poles will be key to humans living in space. 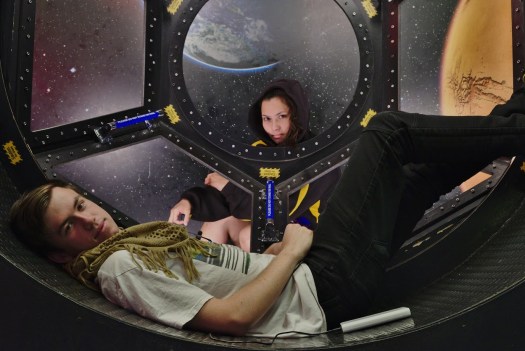 The teams must present their robot and design philosophy at the competition, submit a systems engineering paper explaining their methodology, perform public outreach for underserved and underrepresented K-12 students, and design, build and compete a robot to simulate an off-world mining mission.

The robot must be no more than 1 meter long and 60 kilograms in weight. The goal is for it to run autonomously for 15 minutes, navigating rough and icy terrain simulating the lunar surface. Hsu said the Space Sharks are aiming for one cycle of autonomy, and remote controlling the robot for the rest of the 15 minutes.

The competition will take place from May 18-22 at the Kennedy Space Center. Lunabotics, formerly called the NASA Robot Mining Competition, is just one of several NASA student competitions. In 2015 and 2016, CSULB competed in the NASA RASC-AL Robo-Ops Competition to design and build a Mars rover.

The Space Sharks hope to bring 20 people—about half of the team—to Florida at a cost of $12,000. Participating in the competition is an intense experience. Hsu said team members who attend the competition usually end up staying on with the team.

Even with the team scouring the Internet for rock-bottom parts prices and picking up their aluminum from the M&K Metals scrap yard, the robot will still cost $4,000 to design and build. The Associated Engineering Student Body, the College of Engineering, and team advisor, Dr. Praveen Shankar, are all contributing funds.

But if the team hopes to reach its goal to send 20 students to Florida, more fundraising will be needed.

Rani Hanna, business lead on the electrical team, said he is applying for grant proposals and looking to local companies to supply some parts.

Last year’s team learned a lot about what to do when things go wrong, which is typical during a team’s first year of participation in a particular competition. The mechanical subteam had difficulties last year with the design. The delays turned out to be caused, in part, by a defective motor driver that kept burning out the board. But that left the electrical team with only one week to wire it up, and the coding team less than a week for testing.

The defective part was identified as the culprit the third time it burned out the board, but by then it was too late to fix it, since the robot had to be shipped.

“It seemed like the deck was stacked against us,” said Hsu, adding that he didn’t want to let their advisor down. “We learned our lesson last year, and that’s that you should design the whole thing before building it.”

Another challenge was that the competition was held a week before final exams. Hsu was accompanied by Jessica Crisantes, the mechatronics lead; John Cayabyab; and Spencer Jehlik, the drivetrain lead. To get help with the coding, they Facetimed coding lead Christopher Senner and electrical lead Alexander Littleton back in Long Beach. 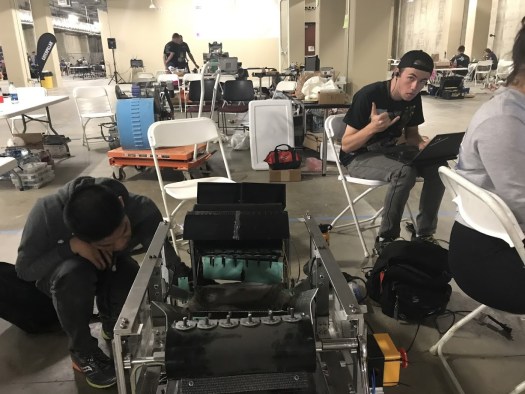 When they arrived at the competition, the robot wasn’t working. Eventually, they got all four wheels moving—amid cheers from fellow competitors. Hsu said the FortyMiners used every minute of their pit time. After the pit closed at 11 p.m., they went back to their hotel rooms to study for finals.

The competition schedule was changed, leaving the CSULB team with so little time to get to the airport that they missed their flight. They spent a night in the airport waiting for a standby flight home.

“This year, the rover is way more complete,” said Hsu, who is serving as systems engineer on this year’s team. “It’s fully functional. The electrical engineer is making a printed circuit board. We’ll get rid of the rat’s nest of wiring. It should be a huge improvement.”

Participating in the Space Sharks gives students an opportunity to work on a multidisciplinary team, solve problems, and apply theory.

“When you join a student organization, you learn valuable technical skills,” said business lead Rani Hanna, a freshman electrical engineering major. Where are you going to get technical skills like this if you don’t have an internship?”

Hsu agrees. “I tell the new people—last year’s team got jobs. That gets their attention.” He describes his teammates as “a group of close friends willing to work with each other for long hours.”

For more information on the Space Sharks, visit their webpage at https://beachrmc.com/. Or follow the team on Instagram at csulb.rmc.