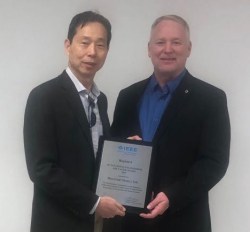 Yeh received the award for making “outstanding contributions to the education of electrical engineers in the areas of digital signal processing, green energy, and smart systems.” He received the award from IEEE Region 6 Director Keith Moore. The CSULB IEEE student chapter last year was recognized with the Large Student Branch of the Year Award.

Yeh serves as the organizer and conference chair for the IEEE Green Energy and Smart Systems Conference (IGESSC), which has been held at Cal State University Long Beach for the past decade. IGESSC will be held at the Walter Pyramid on Nov. 4. Registration is still open.

Yeh has more than 100 technical publications, holds four U.S. patents, and is a member of the National Academy of Inventors. He was selected as a NASA Jet Propulsion Lab Summer Faculty Fellow in 1992 and 2003 and a Boeing Welliver Faculty Fellow in 2006.

Among his many recognitions are the CSULB Northrop Grumman Excellence in Teaching Award (2007), the Distinguished Faculty Scholarly and Creative Achievement Award (2009), and the CSULB Outstanding Professor Award (2015). He also received five NASA Jet Propulsion Lab awards, and the Aerospace Corp. Inventor’s Award. Dr. Yeh has consulted for JPL, Texas Instruments, the Aerospace Corp., AT&T, and others. He is a senior IEEE member and a professional engineer in electrical engineering.