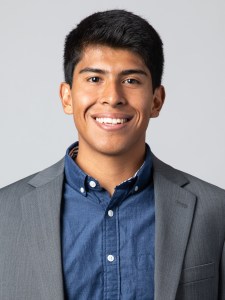 Mechanical engineering senior Jairo Maldonado-Contreras has been named the CSULB College of Engineering’s 2019 Outstanding Graduate. A member of the Society of Hispanic Professional Engineers, he has held internships at the NASA Jet Propulsion Laboratory, Massachusetts Institute of Technology, and Northwestern University.

After graduation from CSULB, he will pursue a PhD in robotics at GeorgiaTech, studying human-intent recognition algorithms used to control prostheses and exoskeletons under advisor Dr. Aaron Young.

Attending high school in Central California, Contreras had good grades and an interest in math, but no plans for attending college. However, following a friend’s example, he submitted several applications, and was accepted at CSULB. Upon arriving on campus in 2014, he joined the Beach Engineering Student Success Team (BESST), which provides a cohort experience and supplemental tutoring.

“I have witnessed Jairo’s professional growth and unwavering determination to learn, overcome challenges, and pursue his educational and life goals,” said Dr. Marayong in her nomination letter. “I have always been impressed by Jairo’s accomplishments, maturity, and professionalism. He also wants to give back to others by staying involved as a peer mentor and being a part of several student organizations. I truly believe that Jairo defines what CSULB is for our students.”

“My achievements would not be possible without the relentless support of Dr. Panadda Marayong, Dr. I-Hung Khoo, Dr. Saba Reda, Lina Lopez, SHPE, CAMP, BESST, BUILD, and Club Soccer,” said Contreras. “My mother, family, and hometown friends have also played a major role by grounding me to my roots and inspiring me to be my best self. I want to thank CSULB and COE for recognizing my achievements.”

During his years at CSULB, Contreras received Boeing, Alice and J.P. Wang, and College of Engineering scholarships, and has frequently made the President’s and Dean’s lists.

Contreras was named the CSULB College Assistance Migrant Program’s Student of the Year in 2017. He’s also been eager to help others, working as a mechanical engineering tutor, and as a peer mentor for BESST and CAMP.

Contreras credits his mother, Rosa, an agricultural worker, for inspiring him to work hard.

In 2017, Contreras completed a summer internship at the Shirley Ryan Ability Lab at Northwestern University. Last summer, he worked on a four-limbed robot while completing an internship at MIT’s D’Arbeloff Lab. He’s currently working as a year-round intern at JPL’s Mobility and Robotic Systems Group designing components of hybrid ground-aerial vehicles for the DARPA SubT Robotics Challenge.

The Outstanding Graduate Awards reward individuals who have distinguished themselves academically and demonstrated service and dedication in national, local, and campus organizations. They will be recognized at the 2019 Alumni Awards on Thursday, May 9 at the Hyatt Regency Long Beach.