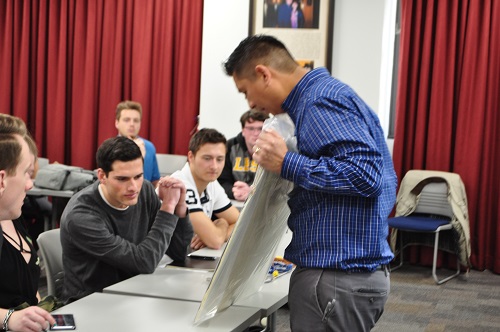 Mechanical engineering alumni Bryan Calungcagin, now a research and development test engineer with Northrop Grumman, returned to campus Wednesday with some advice. All that theory in courses like power plant design, control systems, and finite element analysis? Students are actually going to need it once they start working in the engineering field.

“Everything you learn in school, you’ll use,” said Calungcagin, who graduated from CSULB in 2012 and is now working on his master’s degree in systems engineering at Loyola Marymount University.

Some other things also won’t change. Calungcagin said he’s transitioned from studying until “three or four in the morning” to troubleshooting projects late at night.

Calungcagin works in Northrop Grumman’s Area 67, and describes himself as a MacGyver. “We take a bunch of stuff, we whip it around, and we test it,” he said. “The freedom I have to engineer is incredible.”

His trajectory isn’t typical. Calungcagin said he spent several years working as an auto mechanic on race cars—satisfying his innate urge to take things apart—before he realized he wanted to be designing not swapping out broken parts.

He came to CSULB as a transfer student from Fullerton College. Unfortunately, he and other members of his graduating class faced dismal job prospects in engineering due to the recession. Calungcagin said he sent out about 1,000 resumes, then began attending job fairs asking employers what qualities they were seeking.

Today’s graduating students have many opportunities. “It’s a great time to be an engineer,” Calungcagin said. “Right now, the industry is exploding.”

In his sector alone, Calungcagin said Northrop Grumman is hiring 700 interns, who will have a chance at being hired for an entry-level job. The company looks for a GPA of at least 3.25 and experience with projects.

He encouraged students to think big. For example, a 3D printer with a robotic arm that can work in a vacuum could be used for manufacturing in clean rooms, printing parts to help astronauts with repairs, or colonizing Mars.

Engineering also requires some quick thinking. When he was presenting his senior design project, which involved building a fire protection system, they burned out the motor during the demonstration for the Fire Department. To get the demo back on track, a team member had to run to Home Depot and buy a new motor.

Calungcagin’s presentation was part of the COE Office of Professional Development & Internships’ Speaker Series, which provides students with advice on resume and networking, as well as perspectives of engineers working for various companies.