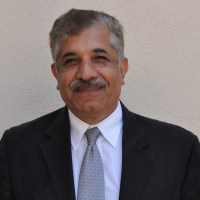 Hamid Rahai, Associate Dean of Research and Graduate Programs in the CSULB College of Engineering, has been named a Senior Member of the National Academy of Inventors (NAI). He is among 66 inventors named to the inaugural class of Senior Members, representing 37 NAI Member Institutions collectively holding more than 1,100 issued U.S. patents.

Dr. Rahai is founding director of the Center for Energy and Environmental Research and Services (CEERS), and a professor in CSULB’s Mechanical and Aerospace Engineering and Biomedical Engineering departments.

He holds two awarded patents in wind energy and four pending patents for drag reduction of vehicles and aircraft, vehicle emission controls, and patient-specific diagnostic systems of lung function. He has served as principal investigator or co-principal investigator of more than $6 million in grants and contracts.

Dr. Rahai is a member of the CSULB NAI chapter and recipient of a 2004 Northrop Grumman Excellence in Teaching Award; 2012 CSULB Academic Affairs Award for Impact Accomplishment of the Year in Research, Scholarly and Creative Activity; and 2014 Outstanding Engineering Educator Award from the Orange County Engineering Council.

“We congratulate Dr. Rahai for earning this important distinction,” said College of Engineering Dean Forouzan Golshani, also an inventor. “He fosters a spirit of innovation in the College of Engineering by his tireless work guiding faculty on developing research proposals and forming productive government and industry partnerships.”

The NAI awards Senior Membership to nominated faculty, scientists, and administrators with success in patents, licensing, and commercialization, who have produced technologies that impact society. To be named a Senior Member, nominees must also foster a spirit of innovation through enhancing an inventive atmosphere, while educating and mentoring the next generation of inventors.

The election of the inaugural class coincides with National Inventors’ Day, which this year marks Thomas Edison’s 172nd birthday and celebrates innovators and their contributions to society. “The election of the inaugural class of NAI Senior Members is a significant designation for a group of prolific inventors from NAI Member Institutions who are collectively a driving force in American innovation,” said NAI President Paul R. Sanberg. “This is truly an accomplishment worth celebrating.”