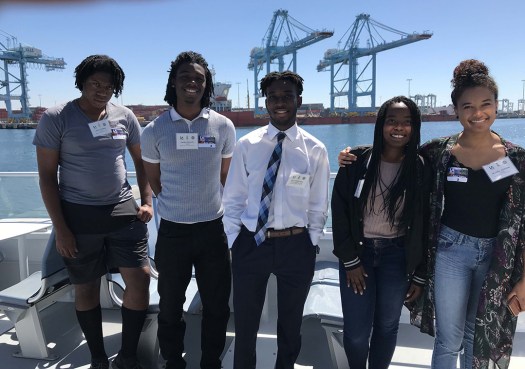 Members of the CSULB chapter of the National Society of Black Engineers last month toured the Port of Los Angeles as part of NSBE Day at the Port of L.A.

Attendees received an introduction to the port and the City of Los Angeles, which recruits and employs undergraduate and graduate students in engineering and engineering-related fields. The Port partnering with NSBE — one of the largest student-governed organizations in the country — was a natural fit with the City of Los Angeles’ mission “to increase the number of culturally responsible black engineers who excel academically, succeed professionally, and positively impact the community.”

Williams also spoke at the event.  “Without Myles’s efforts, this event would not be happening today,” said James Davis,  assistant chief harbor engineer at POLA.

Senior Sara Carter, a member of the CSULB NSBE chapter, said she hopes the event will be hosted annually.  It was “very eye-opening as a computer science major, as I thought that the POLA only hired civil engineers, and now I’m aware of all the opportunities available here,” she said.