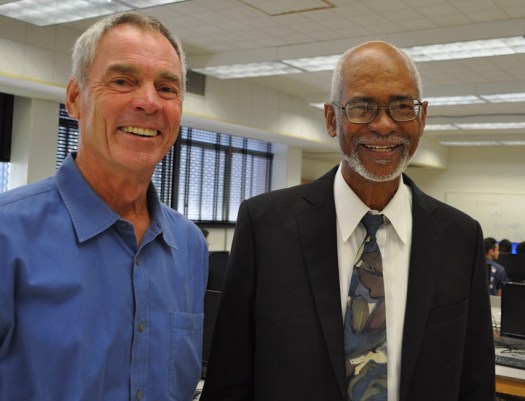 As an engineering undergrad in the 1960s, Jeff Clements was told by one professor that he wasn’t “college material.” But that didn’t stop Clements from earning his bachelor’s degree in 1962—then his master’s and doctorate—and go on to help produce space hardware for top aerospace companies such as Hughes, TRW, and Raytheon.

Clements, the first African-American CSULB student to earn a bachelor’s degree in mechanical engineering, was one of two speakers to share experiences Monday with incoming students of the Beach Engineering Student Success Team (BESST), which features intensive tutoring and cohort-based classes.

Al Moro, former chief executive director of the Port of Long Beach, told incoming freshmen he was initially drawn to aerospace engineering, but later developed an interest in structures, earning a bachelor’s degree in civil engineering from UCLA and an MBA from Cal State Los Angeles.

Moro’s career followed a technical path through engineering. He rose up the ranks to be the chief engineer for one of the busiest ports in the world. The Port of Long Beach, which can accommodate the world’s largest cargo ships, presents engineering challenges that distinguish itself from other ports.

Moro, who has served on the Dean’s Advisory Council for four years, advised students to ask questions. “In the workforce, if you’re challenged, you turn to your co-workers. Use this program as your team and share your problems,” he said. “It’s going to be fun, but it’s also going to be challenging.”

Clements said he tried to study with his fellow students, but was rebuffed.  “That hurt,” he said. “That hurt a lot.”

Maintaining his grades in classes was a struggle, but his hometown of San Pedro was behind him. “It was a big deal among my peers for a person of color to make it into Long Beach State,” he said. “But too many people were rooting for me for me to drop out.”

Clements talked about his family’s humble beginnings, sharing how his Tennessee grandfather sold a cow so his father could pursue a future in California. Clements’ parents, Walter and Dorothy, settled in San Pedro and worked hard so their children could succeed. “They always motivated us to do something better,” Clements said.

Before retiring, Clements worked four decades in the aerospace industry. Some of the spacecraft systems he worked on are on display at the Smithsonian Museum in Washington, D.C., and the Museum of Science and Industry in Los Angeles.