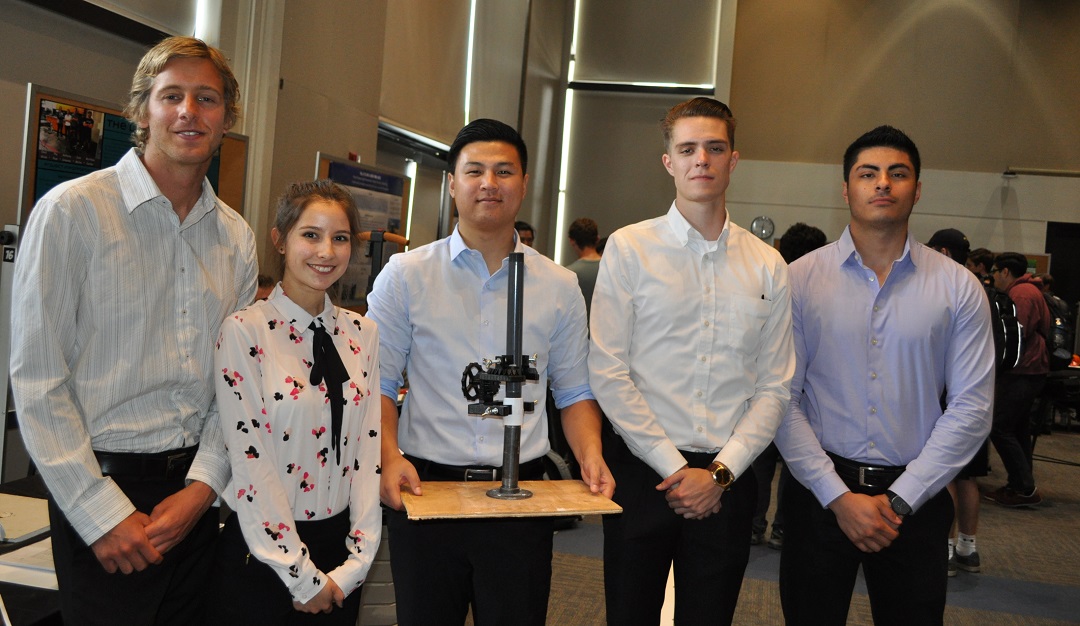 On Monday, 22 groups of mechanical engineering students demonstrated their Senior Design Projects at the Engineering Innovation Expo in the University Student Union. Heavy on green and renewable energy, the projects were the results of two semesters of work—including plenty of late nights and weekends.

“Collaborating and coming up with solutions without a professor was fun,” said Cesar Gayosso, whose team created an automated lead belay to give lead rock climbers a way to climb safely on their own.

Students not only learned to work together, but to troubleshoot, test, and stick to a budget just like in the real world. One thing most of the students learned early on: it’s a lot easier to come up with an idea than it is to build the concept and make it work.

Each team is given $400 for parts. That leads to some restrictions. For instance, the builders of a smart trashcan with a built-in vacuum had to use plastic instead of metal for their project, which led to some strength issues. The producers of the belay used honey instead of silicone for a damper.

The modest budgets also led to some creative problem-solving. One team built part of its folding bike from metal tubing. Another team borrowed a beach cruiser from a team member’s sister to be converted into a wind-based cellphone charger. The builders of the Charge Cart, meanwhile, found their shopping cart at the end of their cul-de-sac.

Senior Design Projects are intended to give students hands-on practical experience, and a taste of what it’s like to work as a professional engineer.

“I’m truly impressed, and the judges were also impressed as they walked around,” said College of Engineering Dean Forouzan Golshani. “You are all winners.”

Added Mechanical & Aerospace Engineering Department Chair Jalal Torabzadeh, “This is a great occasion for the MAE Department. These 22 great projects have shown the talents of students and the ability of the school to compete at local, regional, and national levels.”