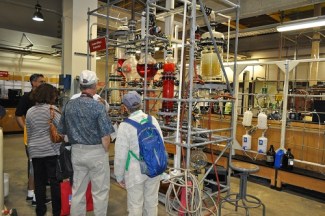 When Wendy Delgado studied chemical engineering at CSULB, she was one of only 10 women in the 200-student major. Often, she’d be the only woman in her class. To fit in, she wore a baseball cap and no makeup. After graduation in 1996, Delgado went on to work for Johnson & Johnson, where she is now a staff software quality engineer.

When Jay Gould graduated with his master of science in mechanical engineering in 1988, the Engineering & Computer Science Building was still under construction. He makes it a point to attend the twice-yearly Engineering Distinguished Lectures, but hasn’t come to a homecoming. After an engineering career spanning more than three decades, most recently at Honeywell, Gould is looking at retirement.

Gould and Delgado were just two of the CSULB alumni who stopped by the College of Engineering Saturday to tour the labs with their families. For Homecoming, the College opened its labs to the public, offering displays of human performance and robotics, process control experiments, a passenger jet, a fighter jet simulator, multimedia, and a videogame competition. The event attracted alumni from all majors, as well as future students.

Dean Forouzan Golshani said engineering is essential to mankind’s healthy, happiness, and safety. “It’s not about fixing things. It’s not about being good with your hands,” he said.

According to the National Academy of Engineering, the greatest engineering contributions of all time are electricity, automobiles, airplanes, and water supply and distribution. “These are important things that engineering has contributed to the world,” Golshani said.

At CSULB, the College of Engineering is dedicated to helping produce a new generation of engineers. “Our motto is Access + Success. We serve any student who qualifies to be admitted to this university,” the dean said.

With enrollment of nearly 5,000 students, the College is working on further reducing time to graduation and ensuring student success with centers for tutoring, writing and communication, graduate studies, and professional development. “We take pride in what we do to make our students successful,” he said.