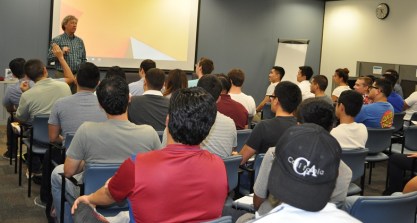 The El Segundo-based company provides technical expertise for the U.S. space program. Nearly three-quarters of the company’s 3,500 employees hold advanced degrees, including over 700 with doctorates.

The company led an information session at the CSULB Career Center in advance of this week’s STEM Job & Internship Fair to let students know about available opportunities. The company hires about 200 interns per year for 8-week periods in the summer. Five internships are allotted for CSULB students this year. Since Aerospace Corp. receives about 2,000 internship applications each year, it’s advisable to apply for more than one internship to increase your odds.

Interns can work in the El Segundo headquarters or at facilities in Colorado, New Mexico, or Utah—and have a chance to work on interesting projects. Once the internship is completed, interns are evaluated and may be invited back.

The company also hires engineering graduates. New technical hires typically go to work in the Engineering & Technology Group. The group lets employees work on a variety of projects and hone in on interests for a 7-year period. After a specialization is selected, the company often sends employees back to university to obtain advanced degrees.

Dunbar manages the Guidance and Control Subdivision in the Engineering and Technology Group. What he likes most about working at Aerospace Corp. are the variety and learning opportunities.

“Almost any good company—the minute you get there—they’re going to have you start learning,” he said.

After earning his undergraduate degree in electrical engineering at CSULB, he worked in the petrochemical industry, spent a year doing research and development in Alaska, then went to work for an aerospace company where he was given the chance to work on many interesting projects.

That inspired him to return to CSULB to earn his MSEE. His thesis advisor was Henry Yeh, a new faculty member. Yeh is now chair of the EE Department. Another member of his committee worked at the Aerospace Corp.

After graduation, Dunbar applied for a job and was hired. “That was in 1987,” he said. “I’ve been there ever since. I love it.”