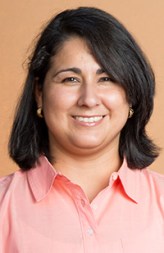 Highly interdisciplinary, BME is a blend of chemistry, physics, and computer, mechanical, and electrical engineering. Embracing everything from diagnostic systems and artificial organs to prostheses and medical devices, it’s viewed as the bridge between medicine and engineering. Within BME are a number of specialties, including Bioinformatics, Biosensors, Biomechanics, and Biofluids.

While working on her Ph.D in Bioengineering from University of California, Berkeley and University of California, San Francisco, Ayala developed bioengineered microstructures for cardiac repair that improve cardiac functional outcomes after a heart attack in the rat model. Recently, she engineered a stem-cell-laden composite tissue system for applications in tissue regeneration that promotes angiogenesis and modulation of the immune response.

Growing up in Mexico, Ayala was fascinated by articles about the brain in a family encyclopedia. After moving to California during high school, she became interested in psychology, sociology, social work, and photography. But an aptitude for science and math led her to undergraduate study in chemical engineering.

“Trying to understand how things work has been my main interest,” she said.

Ayala was also driven by the motivation to contribute to society. The progress being made in BME, she said, “gives me a lot of hope for the future. It’s going to enhance a lot of the therapies being researched right now.”

While working on her PhD, the patients in nearby UC San Francisco Hospital provided a clinical component to her research. The four years she spent as a postdoctoral research fellow in the Department of Surgery at Beth Israel Deaconess Medical Center, Harvard Medical School, and Harvard University’s Wyss Institute for Biologically Inspired Engineering provided exposure to a variety of researchers. “It’s a very vibrant environment for interacting with other scientists,” she said. “Being able to work with them was very rewarding.”

Although still setting up her lab, Ayala sees many opportunities for partnering with nearby medical and educational institutions. Her initial goal will be applying for grants from the National Institutes of Health and National Science Foundation to fund additional resources.

“I’m very excited to be here. The students are very committed and I hope I can contribute to their success,” she said.