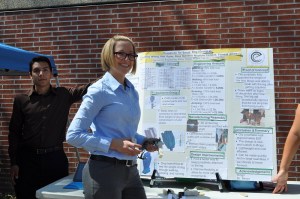 From an operational hovercraft to a 3D-printed dog prosthetic to a grill that texts you when your food is cooked, the student projects shown off during the CSULB Mechanical Engineering Department’s 2015-16 Senior Design Project Exhibition demonstrated both creativity and technical understanding.

More than 100 students were enrolled in the Senior Design class, a two-semester capstone course that emphasizes the theory and practice of modern design and manufacturing. During the first semester, students focus on concept design and embodiment design, while the second semester is dedicated to project implementation.

ME Associate Professor Chris Beyer said the course teaches systematic design methods and tools combined with the application of CAD/CAE/CAM software and modern manufacturing tools. “Our very successful series of senior design projects was facilitated by the modern technologies and capabilities contained in the DENSO Design and Manufacturing Laboratory (additive manufacturing/3D printing, plasma cutting, CNC machining, 3D scanning, etc.), and in our updated traditional machine park in the ME Tech Shop,” she said, thanking the program’s industry partners.

Strause said his team used a one-engine concept—dedicating some of its power for thrust and some for lift. “It took a lot of time and a lot of thinking,” he said, adding that some adjustments had to be made to generate more lift. 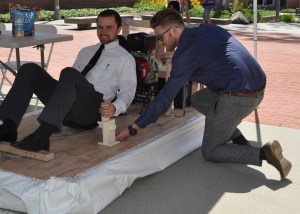 Teammate Taylor Stafford-Lewis said after two semesters of planning, the hovercraft took 8 days to build. “I wasn’t too worried,” he said. “We got it off the ground.”

Michaela Duran said her team’s autonomous grill lets backyard cooks relax while their food is cooking. The grill notifies then when their meat or vegetables are done.

The team of Courtney Wittrig, Alex Parks, Rosa Quintero, Mauricio Campos, and Thomas Johnson set out to make an inexpensive prosthetic that could assist thousands of dogs in walking again. The average dog prosthetic costs from $600-$1,000. The team’s 3D-printed prosthetic costs $29 to produce. “If we can manufacture a much cheaper prosthetic, we can help a lot of dogs,” said Johnson.

For many students, the exhibition marked the culmination of their CSULB engineering education. The senior design project, said Zacharie Fowler, whose team demonstrated how to 3D print carbon fibers, “was definitely a learning experience.”