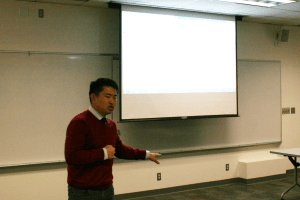 Bryan Kwon, a 2004 CSULB computer science graduate, was back on campus this week to share his experience in the job world with College of Engineering students. Kwan, now senior director of customer engagement at Santa Monica-based Akana, told attendees at the Professional Development Workshop that it’s important that your first job after college matches your interests.

When he graduated, Kwon went to work in information technology, but after three years became bored with backing up tape drives and taking care of routine technical issues. “I was really bored,” he said. “I really wanted a challenge.”

Kwon interviewed with Google, a process that took six months and included seven interviews with managers, including one in London and another in Japan. He was eliminated for a position in the U.S., but was advised of an opening in Korea. Since he spoke Korean and was looking for a new opportunity, he moved to Korea, but found that the job wasn’t a good fit due to its lack of work-life balance.

When he started at Akana—a provider of API solutions previously known as SOA Software—he was answering phones. But whenever a chance came up to visit a customer or help solve a problem, he took it. He felt much more energized trying to come up with creative ways to resolve customers’ needs.

Kwon said he’s happy where he ended up. He’s landed in a growing field—APIs are a $1 billion industry, critical to connect smartphones, applications, databases, and platforms. “Everybody has an API,” he said.

One student asked him whether working at a startup can help establish a stable life. Kwon responded: “It creates a chaotic life!” Startups typically require long work hours and extreme dedication.

Friends are important, Kwon said, because much hiring is done by word of mouth.