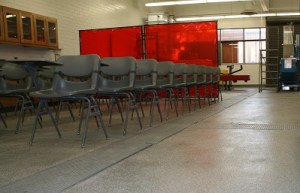 While many students were on summer vacation, the CSULB College of Engineering facilities team was hard at work completing an extensive lab modernization project. Involving two years of funding allocations, nearly a year of planning and more than a month of construction, the upgrades will not only expose students to state-of-the-art equipment, but also increase accessibility and make working in the labs even safer.

The biggest, and most expensive, part of the project was replacing cement floors with safer non-skid surfacing in the industrial labs, said COE Facilities Coordinator Mike Berg, who oversaw the planning and work. Raised platforms were also removed from many labs to improve handicapped accessibility and reduce trip hazards. There’s also now a trolley to move heavy lab materials, a hoist for sheet metal, and new personal protective equipment in labs throughout COE.

“Our No. 1 concern is safety,” said Berg. “We had annual funds set aside for safety upgrades. But ensuring that students gain experience on up-to-date equipment is also important too.”

For Computer Engineering and Computer Science students, that means faster computers. Quad-core HP computers with 8 GB memory and 500 GB storage replaced HP dual-core machines from the 90s in two of the nine labs. And the new HP computers are multi-OS, running both Windows and Linux for flexibility. In fact, each COE department received new computers for two of their labs.

CECS also added a second Mac lab, with 31 new quad-core i5s with 8 GB memory and 1 terabyte storage. Macs are becoming essential to helping students create circuit board and other simulations.

Mechanical and Aerospace Engineering received new equipment in the Thermal and Measurement and Instrumentation Labs. And in line with the movement from macro to micro, the new equipment takes up a lot less space. For example, a steam plant from the 1950s that occupied 600 square feet was replaced by a unit requiring 50 square feet, said Berg.

The Seismic Structures Lab is also now less of a space hog. Tearing out the ancient hydraulic pumps that used to move the floors to simulate earthquakes has freed up an entire room for another purpose. Extra space was also gained by demolishing a large cooling tower that became obsolete when the university established a central plant.