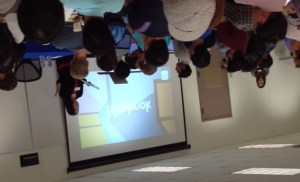 Facebook, like many Silicon Valley companies, has been pushing hard to create a more diverse workforce. On the heels of its most recent diversity report, which showed only slight improvement, the company has been trying new approaches to create the varied workforce the company sees as key to the success of its products and business.

For years, Facebook recruiters said they visited the same 20 universities to search for new technical talent. But this year, they began reaching out to new educational institutions, including for the first time to California State University Long Beach, where Latinos and Asian American students are the largest ethnic groups. CSULB is only one of six universities that Facebook is visiting this year.

While on campus, representatives from the social-networking goliath talked to core curriculum students, participated in the Sept. 17 STEM Job Fair, and held a mixer with College of Engineering students. “It’s an awesome, awesome company to work for,” said recruiter Rena Hooda. “The mission of connecting the world is truly at the core of everything we do at Facebook.”

Cherngchaosil started building mobile apps during her senior year, and after completing Facebook Bootcamp, picked the mobile notifications team to join. “I had no idea how to do it. I was really lost at the beginning,” she said.

Drawing on her experience from college, she studied the code, talked to her colleagues, and developed an idea of how the code would work. What Cherngchaosil appreciates most about Facebook is working with smart people and doing things no one has done before. “You see the code, and it’s ‘Oh my God,’” she said.

Her advice to students? Make the most of student organizations, participate in hackathons, and enter programming competitions. “These kind of things you do at school really help you grow and prepare for a career.”

The College of Engineering Facebook mixer—organized by the COE Office of Professional Development and the CSULB Career Development Center—drew nearly 100 students from various engineering disciplines. Among the most popular questions: What’s the interview process like at Facebook, and how many hours do you have to work?

Cherngchaosil said she worked 10-12 hours a day as an intern to get up to speed on the code. But since employee performance is measured by impact not hours worked, schedules are flexible. Cherngchaosil said teams are small, people are friendly, and managers are dedicated to open communication.

To increase your software development skills, she suggested mastering algorithms, data structures, and turning thoughts into code. It doesn’t hurt to have some of your code on Github, either.

For internships and new grad positions, two phone interviews plus an on-site technical interview are typical. During an interview, applicants should make sure they fully understand the problem.

The company has engineering offices in Menlo Park, Calif., Seattle, London, New York, Boston, and Tel Aviv. And choices of divisions to work in include Instagram, which Facebook bought for $1 billion in 2012, and Oculus Rift, which Facebook acquired last year for $2 billion. Other perks include bottomless sick days, two weeks of paid-time off from the start, and 100-percent paid medical, dental, and vision benefits.

And then there’s the free food. “The only thing better than the people is the food,” said diversity program manager Denise Hernandez, describing Facebook’s three restaurants and mini-kitchens on each floor. “You can save money. You can pay off your loans. You can send money to your family. It’s a dream job for someone coming straight out of college.”